BABA is the creative nickname I came up with for Ashley Benson. 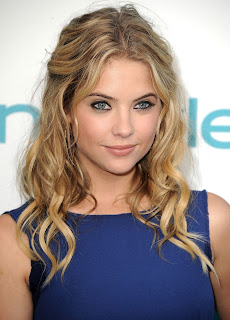 I came up with a highly creative and somewhat unique nickname for the actress Ashley Benson. Through my research, I came to find out that nicknames and names cannot be copyrighted. They could be trademarked. However, I do not have the funds for that. I came up with the nickname BABA. I thought of this name in early 2017. The nickname can be in capitals or written out like this: Baba. I think the capitals look better. It's just a matter of personal taste I suppose.

The idea came to me when I had a made a small donation to Ashley's Gofundme campaign for wags and walks. The initials AB were used in her profile page. I looked at those initials in capital letters and I thought it would be cute if these initials were reversed to BA and then times by two: BABA.

It's an affectionate nickname for Ashley Benson. I hope she likes it and that it catches on. I don't want any money for this nickname. It would be nice though to be credited for coming up with the nickname.

Here's a link to a YouTube video about the BABA nickname.

The Remote Influencer approach to Self-Help and Personal Development.

I wrote a copyrighted PDF on March 30th 2017. The PDF is the same as the title of this post. The PDF is a short report which provides some information on my new HR Learning and Development solution.

Here's a link to a post I had written up about the above. It's from my Facebook PTRI Research Self Directed Learning group/club. It's free to join this group/club. The link has another link to my Youtube video as well.

You can view and/or download my PDF through the link above. Even though my solution is geared more toward introverts, extroverts can benefit from my solution too.

Anand
I am somewhat of a seeker. I have been interested in self-help and spirituality for several years. I did some ESP tests with Dr Edwin May phd in 02. I did very well in my first two tests with Dr May. I came in the top 3 out of 190 people in my first test. The success with the tests, along with my spiritual experiences, gave me the inspiration to develop a form of Remote Influencing. Please see my web site for more info about me and about the work I do.