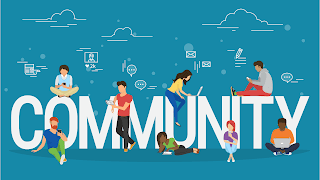 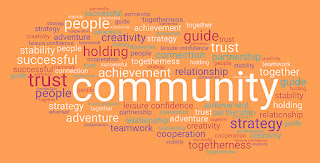 When I had written the constitution for Project The Remote Influencer - PTRI, I wrote that, 'helping' society is one of the aims for PTRI. I did not elaborate on this point. The reason for this is simple. I want group members to be creative when it comes to the ways in which we can help society. The great thing about group or club constitutions, is : The rules can always be updated, changed over the course of time. They are not always set in stone.
Do you like the images above? In the top image, you see groups of people using internet devices. I chose that image as it is the foundation for PTRI. Our work is internet based. In person work can and will be a part of PTRI. However, most of the work is done online. As of February 2021, 1.8 billion people use Facebook groups every month. Adweek says there are 620 million groups on Facebook. These stats are impressive to say the least. As I have said many times in the past, there's great potential with Facebook groups.
In regard to Facebook groups, group members can come from countries across the globe. This extends what one would call a community. Facebook groups are virtual communities. I run several Facebook groups. I now reside in Luton, UK. I had lived in the USA for over 16 years as well. I will be looking to recruit potential Facebook group members from Luton too. I have a soft spot in my heart for Luton. I had lived in this town before I had moved to America as a green card resident. I came back to live in Luton in Feb 2006. I am working on a self initiated project that's geared toward helping my town to advance in several ways. I will write more about this in future posts.

The QR code for this blog. 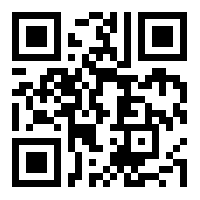 The image above should be the QR - Quick Response code for this Google blog. I am not too great at using mobile or cell phones as they're called in the USA. However, I do believe that QR codes can be useful.

I have had qr codes for my other sites placed onto double sided business cards. I conducted a test the other day. I had asked one of my friends to scan the qr code of one of my business cards. The test proved to be a success as my friend was able to go direct to my site without having to type in the web address. This saves valuable time. I will conduct a similar test for the qr code for this blog as well.

Anand
I am somewhat of a seeker. I have been interested in self-help and spirituality for several years. I did some ESP tests with Dr Edwin May phd in 02. I did very well in my first two tests with Dr May. I came in the top 3 out of 190 people in my first test. The success with the tests, along with my spiritual experiences, gave me the inspiration to develop a form of Remote Influencing. Please see my web site for more info about me and about the work I do.